New York is a city that encourages consumption, there is no denial, its citizens are often driven by the madness of shopping and all visitors return to their countries of origin with suitcases to burst or even with a new one. So we want to tell you in this article the best places to go shopping and what to buy in New York when you’re walking through a certain area.

Usually all stores have a permanent sales section where they expose articles from other seasons and this is in addition to the special discounts that take place every day that are holidays and the weekend before the holiday (usually these days fall on Monday). There are also the typical sales after the Christmas holidays and in summer. The most spectacular sales take place on the weekend after Thanksgiving (held on the last Thursday in November).

Typical clothing stores such as Gap, Banana Republic, Anne Taylor Loft, Abercrombie & Fitch,… are all over the city although there are areas where shopping is concentrated. In each area we will highlight the most emblematic stores to buy in New York, which does not mean that you can not find other types of stores.

The Apple, NBA or the famous Tifanny & Co. stores are located on Fifth Avenue between 59th and 50th streets. Right in front of the Rockefeller Center is the famous Sacks department store with one of the best-known Christmas decorations. In the Rockefeller Center you can also find almost all the stores like Anthropology, Cole Haan, Michael Kors, Brookstone (very good for buying very original gifts), NBC Store, L’Occitane, Swarovski, and even a store of the Metropolitan Museum of Art, very well managed when you have forgotten to buy a gift.

New York is known for having the “most expensive corner” in the world, which corresponds to the intersection of 57th Street and Fifth Avenue, as in this corner are Tiffany & Co, Bulgari, Louis Vuitton and Bergdorf Goodman. The prices are untouchable but it is worth going to these stores just to see, particularly in Tiffany where you can visit the five floors of jewelry and also “up and down” in elevator. In addition, on Fifth Avenue there are also nearby shops of Prada, Fendi, Rolex, Gucci, Pucci, Diesel, Cartier, etc…

However, to buy jewelry and particularly diamonds, it is best to go to the famous 47th Street, also known as the Diamond District…although only a few can afford to buy these jewels.

Nearby is also the Columbus Circle shopping center (59th Street and Eighth Avenue) which has a large selection of shops.

Between the 72nd and 58th streets of Madison Avenue you can find the big designer shops, some of them also in the Fifth Avenue: Versace, Prada, Yves St. Laurent, Ungaro, Giorgo Armani, Valentino, DKNY, Max Mara, Ralph Lauren,… One of the best known places is the famous Barneys New York shopping centre (at 61st Street) which includes all the most luxurious brands in one place. Here you can find everything from gorgeous Balenciaga bags to beautiful Manolos. However, Manolo Blahnik’s original store is on 54th Street, between Fifth and Sixth Avenues. Who doesn’t dream of feeling like Carrie Bradshaw for a day buying Manolos in New York!

In Times Square there are still big stores, like Disney’s store, that will make you go back to your youth in that little Disneyland. You will also find a store dedicated exclusively to M&M’s.

Times Square is full of souvenir and electronics stores, but the best thing is that you don’t think about buying electronics here or you could have problems in case something goes wrong. The best thing to do is to go to our specific shopping page in New York to find out where you can best buy these and other items in New York.

This is one of my favorite shopping areas in New York. It includes all kinds of stores: shoe stores (Aldo, Aerosols, Footlocker, Nine West,…), clothing (Gap, Banana Republic, American Eagle Outfitters, Loft, Old Navy, H&M, Forever 21,…) lingerie and perfumery (Victoria Secret, Sephora). At 34th Street, between Sixth and Seventh Avenues, are the famous Macy’s department stores. Don’t forget to ask for the 11% foreigner’s discount at the Visitor Center (showing your passport, it doesn’t include perfumery or cosmetics). Macy’s is also known for its spectacular Christmas decoration.

For lovers of electronics, and photography in particular, I recommend a tour to B&H, located at 420 9th Ave. (corner of 9th Ave. and 34th. street), but it will be difficult for you to leave the store without buying anything.

If you want to see some of the most famous and spectacular Broadway shows, such as the Lion King, Aladdin, Chicago or the Phantom of the Opera, it is best to buy tickets well in advance of your trip or it is more than likely that you do not have tickets the day you want to go see.

If you don’t especially care which musical to go to, you can buy the same day the tickets with great discounts that are offered at the last minute in places like TKTS Times Square, just below the stairs of Times Square, which is usually overcrowded, or in the TKTS of South Street Seaport or Lincoln Center, which are less saturated. At TKTS you will always get a good discount, but they don’t sell tickets for the most demanded musicals (they never have tickets for the Lion King, for example), and they will only offer you good seats at a good price in shows with less hook, but if you don’t have a preference for a particular musical and you don’t mind standing in line, as they only sell at the TKTS box office on the day of the show, you can get tickets at very good prices. For more information on the locations of the different points of sale, visit the official website of TKTS New York.

If you want more information to buy your tickets, we have a complete article with tips and recommendations to buy tickets for musicals in New York at the best price.

Walking along Broadway from Houston Street to Canal St. is another area where shopping is concentrated with stores of all kinds, some more alternatives that give reputation to this bohemian neighborhood. Shoes (Aldo, Aerosoles, Footlocker, Steve Madden Shoes), clothing (Urban Outfitters, Banana Republic, Quilo, Old Navy, Lucky Brand Jeans, Esprit, Levi’s Store, Yellow Rat Bastard, Adidas, Armani Exchange, Prada, Calypso), decoration (Crate and Barrel). As you walk along the side streets, you will find a large number of small shops that are more original than those of the well-known brands. You can also find a branch of the famous Bloomingdale’s department store although the main office is at 59th Street between Third Avenue and Lexington. At Bloomingdale’s you can also apply for the 11% discount for foreigners by presenting your passport at the visitor center, as well as at Macy´s and Sacks. Here you’ll also find a beautiful Apple store (at 103 Prince St), ideal for sitting down for a moment and using their WiFi to stay in touch with your family and friends or check out a new plan in our New York guide.

SoHo is trying to create the so-called Spanish Mile with shops and restaurants in Spain, you can find Agatha Ruiz de la Prada, Custo (sometimes with cheaper prices than in Spain), Mango, Zara, and so on.

The madness of Chinatown

Chinatown is famous for selling handbags and watches (mostly imitations of the big brands) and New York souvenirs. In addition, Chinese food products are available, and there are plenty of Chinese pottery and crockery stores. When buying handbags and souvenirs, you have to bargain!

For those who want to do a lot of clothes or footwear shopping and don’t mind wasting an entire day buying clothes, footwear and accessories, the largest and most recommended outlets are in New Jersey. The best known outlets are Jersey Gardens and Woodbury Premium Common Outlet, which are located approximately half an hour and an hour from New York respectively. To get to them, you have to go to Port Authority and take a bus that takes you to and from these huge outlets.

On May 15, 2019 has opened its doors the first outlet in New York, Empire Outlet, so you no longer need to go to New Jersey to see this giant outlets. Located right in the Staten Island ferry terminal, 80% of the stores are now open and new openings are expected soon.

And for those who don’t want to waste so much time shopping, you can always visit the Century 21 outlet, located right in front of the Oculus, in the Financial District, where you will find clothing and footwear of all brands at very good prices.

I hope that with all these tips you have become clear what to buy in New York and where, if you have any questions we will be happy to receive your questions and suggestions in the comments, chat or through the contact form on our website. 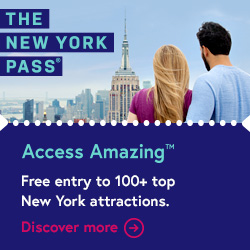